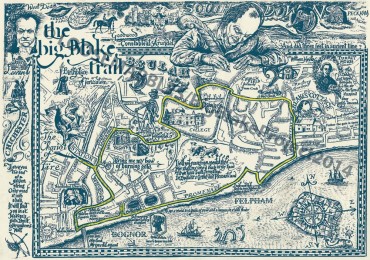 We want to revive the Felpham/Bognor Regis area with a William Blake Trail. We are delighted to announce that the imaginative celebratory map has just been completed by the acclaimed Chris Price and is soon to be installed in the town. Public spaces on the trail are being enhanced with materials from local schools on spiritual and cultural links. It is hoped that the trail will be permanently enhanced with some of the local entry finalists of the Modern Proverbs of Hell aphorism competition.

You can download the William Blake Trail Quiz by following this link.

Blake was introduced to Felpham, Milton and Danté by William Hayley who also taught him Latin and Greek. Blake was a quick learner and this learning, combined with the many visions he recieved here, changed not only his work but his view of himself.
On the 18 September 1800, William Blake set off on his own journey to Felpham. This was one of the first places in Bognor Regis to be “frequented by persons who sought a maritime residence in summer.” (J.B. Davies). Their excitement was tangible as he wrote of his wife, ”She is like a flame of many colours of precious jewels whenever she hears it (Felpham) named”.

To the Blake’s, London was as a desert. With poor harvest, the Napoleonic wars, and the need to feed our troops with the price of bread rocketing, at 7am they pulled out of London leaving behind the riots and storming of the Corn Market. Like from Nazareth to Bethlehem – meaning ”House of Bread” – they journeyed 70 miles. It took them 17 hours and they had to change seven times but all was “Cheerfulness and good humour”. Without the social unrest, cheap meat and cheaper wheat it may have seemed indeed like a House of Bread; there were two smaller mills nearby in huge contrast to the industrial mill across the Thames from his former house. Indeed, he called this place a “dwelling for immortals”.

“The bread of sweet thought & the wine of delight feed the village of Felpham by day and by night”. Blake’s vision of Jacob’s ladder was painted in Felpham.

Blake’s cottage built in the traditional Sussex style is still standing today near the Fox public house. Here he had a confrontation with a solider who was billeted at the Fox and may have urinated in his garden; Blake was later tried for Sedition which soured his relationship with Felpham.
The cottage had a view of open fields down to the sea; Blake loved it and drew his beloved cottage in “Milton.” You can still see the cottage although we can’t guarantee you will see the angel William painted standing in the garden. As a preface to Milton is our anthemic hymn, Jerusalem. Its amazing to think that he was inspired to compose such a anthemic song that still resonates strongly today, right here. Blake may even have sung it himself as biographers claim he sung his poetry with enthusiasm and hope.

Blake’s reference to building Jerusalem isn’t a religious state but about joining together and finding inspiration and strength. However, more than being an anthem for humanity, Jerusalem is about finding your place and purpose and working it out in the community. As Blake said elsewhere, ”The mutual forgiveness of each vice, such are the gates of paradise. And I know that this world Is a world of imagination and vision. I see everything I paint in this world, but everybody does not see alike… The tree which moves some to tears of joy is in the eyes of others only a green thing that stands in the way”. Try and see this land through Blakean eyes. He loved the sea; in particles bright, “The jewels of light distinct shone and clear… Amaz’d and in fear I each particle gazèd”.
Walk along the Bognor Regis seafront to Blake’s cottage, visit St Mary’s Church and see the Blake memorial window.

When Blake painted the church it was surrounded by fields. There is still one field remaining – please go and view it before the last piece of Blake’s “Green and Pleasant Land” in Felpham – a wonderful legacy– could be lost as, sadly, it is under threat (see Save Church Field). Walk over the Rife, still flowing as in Blake’s day and visit Ladybrook Orchard – managed by Greener Bognor Network growing older varieties of fruit to claim back lost heritage.

You can download the map by following this link.