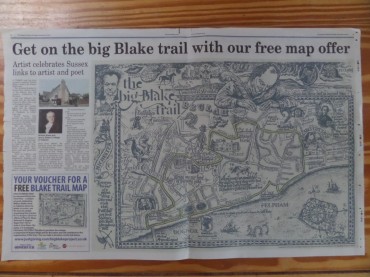 Jerusalem was sung at the station by St Wilfreds Choir Saturday 15 November, to mark the publication of the new Blake Trail map. Later the Bersted Air Scouts had fun building the Bognor-Felpham Blake trail with Angel Stickers.  The famous song, whose words were penned by Blake echoed around the Bognor Station's concourse to the delight of railway passengers.  The stunning map by Chris Price shows the land that Blake saw as Beulah.  According to Blake Beulah was a vision away from Earthly paradise but offers a window into Eden. Beulah references Isiah 62 and is another name for Jerusalem meaning married to the land.  Blake saw feet as connecting man to the land and through him the land to heaven. So what better way to celebrate Blake's fluid vision than with a trail.  The trail also successfully echoes Blake's imagination with numerous reference to his visions of Jerusalem.  The map also honours the Founder of Bognor Regis Richard Hotham, a Hatter and another visionary from Georgian London, and pictures him strolling through Hotham Park.  Naturally to honour the poet that gave us the immortal phrase Green and Pleasant land the trail connects up the local green spaces with views of the Downs and also the Sea that so inspired Blake.  It was the first time he saw the sea and to his friend Butts he wrote, My first vision of light Of the yellow sands sitting. Also featured our Turret House where he worked for his Patron and fellow William Hayley, a poet more highly regarded in his day.  For those less interested in a contemplative walk through Beulah the DL version of the trail map comes with a fun quiz.