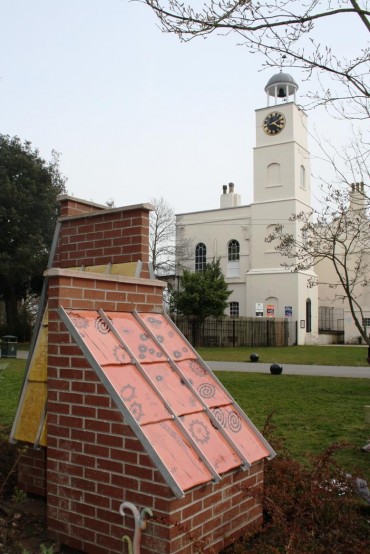 Come and see and be inspired to create art from every day objects.  See the Victoria and Albert Museum’s website for more information on Richard Slee.  http://www.vam.ac.uk/content/articles/r/richard-slee-from-utility-to-futility-essay/

Come to Hotham Park and be inspired to turn every-day objects into works of art. Donated to the Big Blake Project – A Greener bognor network project – by the Cass Sculputure Foundation. About the Artist – Richard Slee

a long list of exhibitions devoted to, or including, his work shows that slee’s sculptural ceramics have been seen widely in britain and internationally. in his early career he worked as a designer-technician for the electric colour company, london (1970-71), as a ceramic technician at the central school of art and design (1971-73) and as the ceramic design consultant for a mural project in macedonia, also in 1973.Richard slee was born in carlisle, cumbria, in 1946. he studied at carlisle college of art and design (1964-65), the central school of art and design (1965-70), from where he graduated with a first-class honours degree in ceramics, and at the royal college of art (1986-88). as well as the teaching posts which he has held from 1973 in leading british art schools, slee has maintained his own studio, first in london, and since 1980 in brighton. richard slee’s ceramics are large, bold and colourful. his early pieces, more sculptural than functional, took the form of massive bulging buds, cornucopias and oversized vessels. robust modelling was softened by colourful glazes in the hues associated with decorative porcelain of the eighteenth and nineteenth centuries. fully three-dimensional, his glazed earthenware also embraced animal forms, vessels and objects based on imagery found in places as diverse as souvenir shops and habitat. his recent ceramics have also combined printed images in colours derived from the imac screen. slee incorporates the most unlikely imagery into his ceramics – everything, it seems, except the human figure. his work is concerned with the things that occupy us in the widest sense, from the everyday to the fantastical, rather than with the human condition. his commission for sculpture at goodwood, cold frames 2000, is his largest sculpture to date.